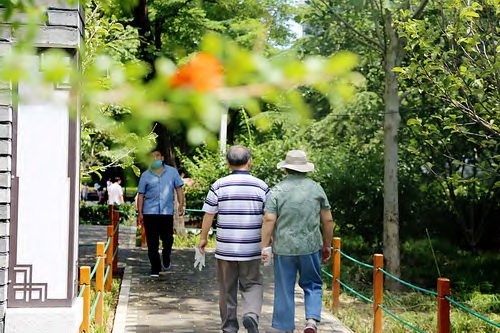 Located at the intersection of Guang’anmenwai Street and Lotus River, an urban leisure green space "Lotus Fragrance Garden" was opened to the public recently. This is the second mini green that is built on the land vacated through demolition of illegal structures and opened in Xicheng District this year.

The "Lotus Fragrance Garden" covers an area of more than 2200 square meters, as a part of the Guang’an Lotus Fragrance scenic spot on the waterfront green way of Lotus River. There are many lotus elements in this green space. Beijing native plants including local ash, ginkgo tree, Shandong maple, Chinese scholar tree, flowering peach, and Chinese flowering crab apple are planted in the garden, dotted with Chinese pine and golden privet.

In addition to various plants, there are Chinese chess table, table tennis table and other recreational facilities, as well as children’s playground in the "Lotus Fragrance Garden". At its north entrance, there are also pergola and fitness equipment.

This year, Guang’anmenwai Sub-district will make more efforts to demolish illegal structures and build green spaces. More than 10 pocket parks are planned to be built in the southeast corner of Xiaomachang, No.23 South Binhe Road, the east side of Shoupakou Bridge, No.10 Maliandao Road, and other places. Sports fields will also be increased and improved.