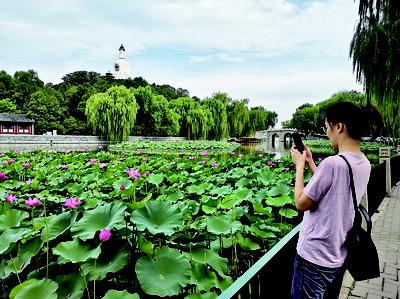 Although it is autumn, nearly 10000 square meters of lotus flowers in Beihai Park are still in full bloom. Lotus flowers and the White Pagoda add charm to each other. A large number of citizens and tourists go to see this spectacular scene. The history of growing lotus in Beihai Lake is long. There was a "White Lotus Pool" in Jin Dynasty; Beihai Park is an imperial garden in Qing Dynasty; and lotus flower is the brand flower of Beihai Park now. Lotus has become an important part of Beihai culture, and appreciating lotus flowers in early autumn has become the first choice for citizens in the near future.